Sometime you may want to tweak the Skydome environment shader to better fit your visual needs.

There’re a couple of parameters to do just that. Under RomboEnvironmentDome->Sky you should find a parameter called Power. It’s an XYZ vector parameter. The Z entry is not used. While the X (the first entry) controls the visual power of the sky, the Y controls how much the sky enlights the scene. You can use these two params to fully control the appearance of your scene. 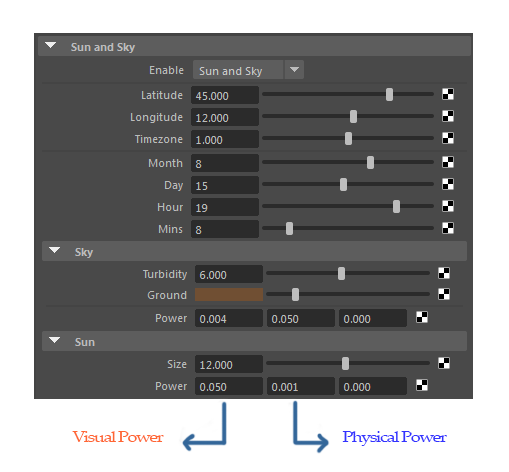 Here for example the Power parameter is left at its default, 1;1;0.

At this point you may want to tweak your camera exposure to let the scene be a bit more visually friendly. Instead we do it directly from the Dome shader.

Here the result by tweaking just the Power.X parameters.. that is the visual power of the sky.

You can see how the surronding buildings are still too much bright because the sky is enlighting them too much. So now we control how much light the sky is shining. To do this we use the Power.Y entry.

So to recap.. the Power.X is to tweak how the sky appears (visual power) while the Power.Y is to control how much the sky enlights the scene (physical power). Same goes for the Sun for example. In facts, under Sun rollout you’ll find the same parameter Power. First entry controls how the Sun will appear in your sky, second entry will control how much actually the Sun will light the scene.

Here for example I crancked up the Sun visual power to change the scene a bit.

While Sun dimension is physically plausible, we may want to tweak it to match some visual references for example. Under EnvironmentDome->SunAndSky->Sky panel there’s a Size parameter that let you do just that. Of course changing the Sun size will change also how your scene is eventually lighted together with shadows fuzziness.